On August 22, 2017, the Michigan Court of Appeals in the case of Roe v. Roe upheld the trial court’s decision to change child custody from the mother to the father.

In the Roe case, the parties married in 2006, separated in 2010, and divorced in 2014.  The father is a soldier in the United States Army and was deployed numerous times during the course of the marriage.  The parties have three minor children together and the children resided primarily with the mother since 2010.  The trial court entered an order in 2012 granting the mother sole physical custody of the minor children.

The father’s request to change child custody was granted by the trial court.

We created a checklist to change child custody in Michigan and a review of the Roe case provides support for the idea that the Michigan Court of Appeals followed the same steps in deciding the case.

In case of Roe, the court  determined that: “at the time of the original order, the [father], due to his work and his commitment with the military, was not in a position where he could provide care and physical custody for the children” a circumstance that “has certainly changed.”

In the case of Roe, the court determined “the [father], due to his work and his commitment with the military, was not in a position where he could provide care and physical custody for the children”  Therefore, there was an established custodial environment with the mother.  The court further noted that: “there have been a number of issues which call into question the stability of the existing custodial environment.”  Notwithstanding, the burden of proof requires the father to prove by clear and convincing evidence to change child custody.

As set forth above, the existence of an established custodial environment with the mother required the father to prove by clear and convincing evidence that the best interest of the children supported a change of custody.

The Roe court then addressed each best-interest factor under Michigan Compiled Laws section 722.23, finding that most of the factors either favored father or were neutral. For example, with regard to the “length of time the child or children have lived in a stable, satisfactory environment, and desirability of maintaining continuity,” the court found that there “has been a number of problems,” explaining that “the failure to be responsible in terms of the instincts to protect the children is a question very much that unfortunately I have answered in the negative with respect to mom.” The court stated that the children “shouldn’t be exposed” to their maternal grandfather, a “registered sex offender.” The court noted that the allegations regarding sexual abuse by another child living in the home were “perhaps unproven allegations,” but reasoned that “there’s enough that there is an obligation to protect children, and it does not appear that mom took that responsibility serious [sic] enough.” The trial court determined that the parties would continue to have joint legal custody of the children and granted [father] physical custody, with [mother] granted parenting time in the summer months and during holiday breaks.  The mother appealed the trial court’s ruling.

The Michigan Court of Appeals upheld the trial court ruling noting that although the mother argued that the trial court erred by finding that the father proved by clear and convincing evidence that granting him physical custody was in the children’s best interests.  “We disagree.” The Michigan Court of Appeals further noting that the trial court’s determination regarding a child’s best interests is a question of fact that can only be set aside if it is against the great weight of the evidence.

The steps required to change child custody in Michigan are clearly defined.  However, another key learning from the Roe case is the idea that the Court of Appeals does not like to upset a trial court’s custody determination because the trial court is typically in the best position to decide custody cases.  Therefore, special consideration should be given to getting it right at the trial level.

Everything there is to know about Michigan Child Custody Laws.

How to change custody in Michigan

How to change custody in Michigan

Michigan child custody law – can a child choose who to live with?

The relationship between custody and child support in Michigan

When can a court suspend parenting time?

Prior to suspending parenting time of a party, the trial court must hold an evidentiary hearing and find by clear and convincing evidence that continuation of parenting time would endanger the child’s physical, mental, or emotional health. Rozek v Rozek, 203 Mich App 193, 194-195; 511 NW2d 693 (1993). The post When can a court suspend parenting time? appeared first on 248-399-3300 Findling Law.

Is it important to be the first to file for divorce? It may be. 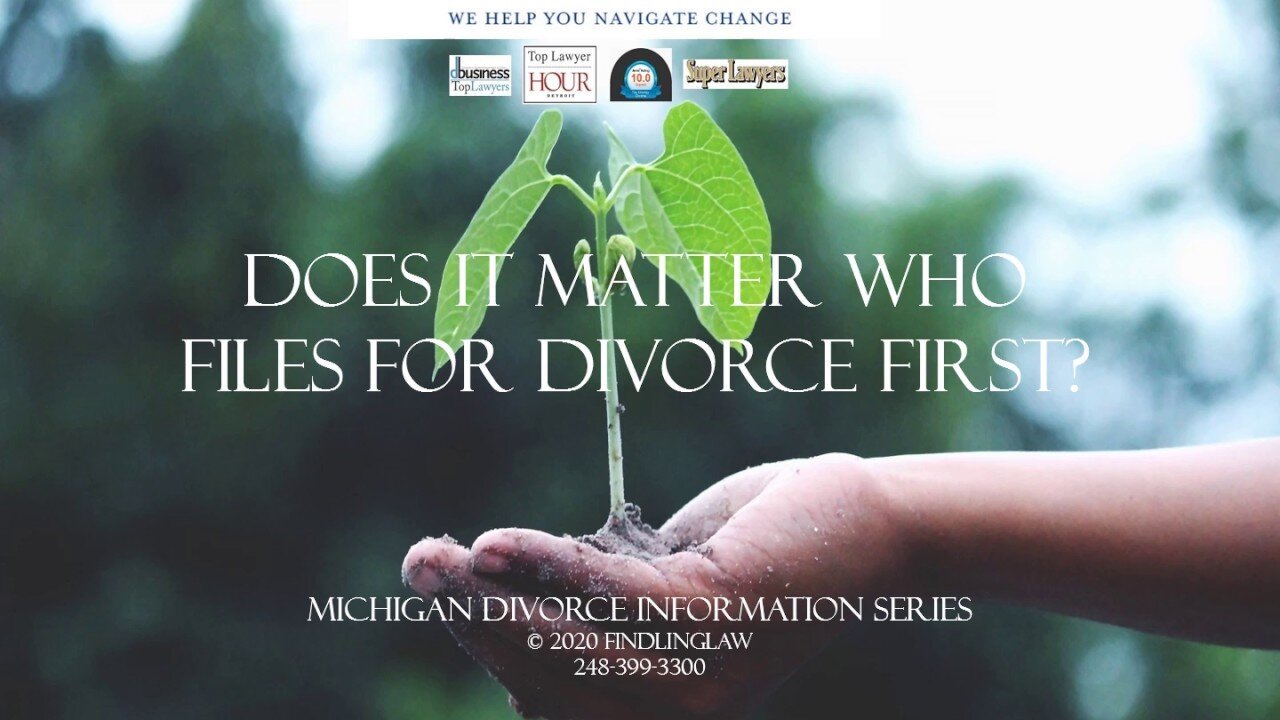 Summer parenting time with Covid. How to parent?

With Memorial Day in our rear-view mirror, we look forward to summer. Sunny days. Lemonade stands. Pool toys. Boats. Games of capture the flag. Ice cream trucks. Sleep-away camp. These are just some of the many things we associate with the summer months in the great State of Michigan. Unfortunately, we are entering summer during[...] The post Summer parenting time with Covid. How to parent? appeared first on 248-399-3300 Findling Law.

Spousal Support in Michigan. How can you get it or will you have to pay?

Michigan Compiled Laws Section 552.23 provides that a Michigan court can order spousal support if the estate and effects awarded to either party are insufficient for his/her support. The post Spousal Support in Michigan. How can you get it or will you have to pay? appeared first on 248-399-3300 Findling Law.

What is a “Black Swan” event and why do financial and news outlets from Forbes to Yahoo and CNN to the Wall Street Journal keep using this mystifying term? Black swan events generally are unpredictable events far beyond what is typically expected and have potentially severe and catastrophic consequences. While some leading epidemiologists and public[...] The post COVID-19, The Financial Markets, Black Swan and Divorce appeared first on 248-399-3300 Findling Law.

Can a court force you to stay in business with your ex?

There is an old adage in Michigan Divorce and Family Law cases. “You do not want your ex as a business partner”. However, in a recent Houghton Circuit Court case, that is exactly what the trial court ordered. On Appeal, the Michigan Court of Appeals address the issue if a divorce court can force you[...] The post Can a court force you to stay in business with your ex? appeared first on 248-399-3300 Findling Law.

The CARES stimulus in a Michigan divorce – who gets the money?

COVID-19 is responsible for a concerning increase in domestic violence as well as a depletion of resources available to those in need. The post COVID-19: THE CONCERNING SURGE OF DOMESTIC VIOLENCE appeared first on 248-399-3300 Findling Law.

Are Zoom hearings in Michigan legal?

Laid off or fired because of COVID-19? The time to modify support is now.

How do you exercise parenting time during the Coronavirus outbreak?

How to divide property in divorce video.

Can you file for divorce in Michigan?

What if you got married in Florida? What about England? Can you file for divorce in Michigan? As a general rule, a foreign marriage that is legally performed and valid abroad is also legally valid in the United States unless the marriage would break state law (Michigan Divorce law).   For example, in some countries[...] The post Can you file for divorce in Michigan? appeared first on 248-399-3300 Findling Law.

How often can child support be modified?

Oakland County Friend of the Court

This video on changing custody in Michigan (custody modification) video webinar provides the most updated information on modifying child custody and an existing child custody order. We believe that knowledge is not only comforting but will put you in control of your situation which is why we created the Michigan Divorce Education Series and in[...] The post Changing custody in Michigan Video appeared first on 248-399-3300 Findling Law.

How to get Divorce legal fees in Michigan.

On February 4th, 2020, the Michigan Court of Appeals recently issued a published opinion on the issue of divorce legal fees. In the case of Colen v. Colen, the wife filed a request for contribution towards her Michigan divorce attorney fees incurred over several years. Divorce Legal Fees – The law The legal basis to[...] The post How to get Divorce legal fees in Michigan. appeared first on 248-399-3300 Findling Law.

What are the divorce laws in Michigan?

With over 21,000 views in just a few years we decided it was time to update another of our most popular webinars. The Michigan Divorce Steps (Michigan Divorce Process) video webinar provides the most updated information on the steps of a Michigan divorce. We believe that knowledge is not only comforting but will put you[...] The post Michigan divorce steps video webinar appeared first on 248-399-3300 Findling Law.

After 109,000 views over 6 years we decided it was time to update one of our most popular webinars. The Alimony in Michigan (Michigan Spousal Support) video webinar provides the most updated information on Alimony in Michigan We believe that knowledge is not only comforting but will put you in control of your situation which[...] The post Michigan Alimony and Spousal Support video webinar appeared first on 248-399-3300 Findling Law.

How to file divorce in Michigan in three steps?

Although the decision to divorce may not be easy, the basic documents to file divorce in Michigan are not complicated. In fact, most of the documents are available online and free from the Michigan State Court Administrative Office (“SCAO”). The SCAO provides basic forms to help people representing themselves navigate the court system. Most Michigan[...] The post How to file divorce in Michigan in three steps? appeared first on 248-399-3300 Findling Law.